In the ‘old days’ of the grid, deploying software to the worker nodes upon which your computing job would run was a non-trivial task. Once you had got it working on the appropriate operating system (generally Scientific Linux), you would have to package it up, send it off, and remotely install it on each system you wanted to run it on. For big experiments this was generally worth the large effort required, and supported accordingly by the experiment’s software teams. But for smaller user communities deploying the software was often presented a big barrier to grid running. But, thanks to CERN’s software deployment mechanism, the CernVM-File System (CernVM-FS or CVMFS), this is no longer the case. 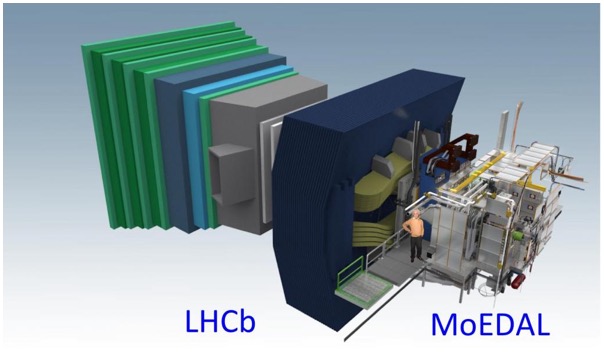 Simulated view of the LHCb and MoEDAL detector geometry at IP8. Credit: The MoEDAL Collaboration 2016.

Designed to meet the software demands of large-scale, world-wide experiments, CVMFS uses a read-only POSIX file system that mounts on standard web servers. As it uses the http protocol, it bypasses most firewall issues, and once installed on a grid site or cluster is available to all users on the /cvmfs namespace. CERN hosts the major LHC experiments, but GridPP also hosts a Stratum-0 for other user communities repositories at the Rutherford Appleton Laboratory.

Recently, GridPP agreed to support the Monopoles and Exotics Detector at the LHC (MoEDAL) with computing resources, and CVMFS was the natural choice for software deployment. As it is housed at the Large Hadron Collider’s Interaction Point 8 (IP8), MoEDAL uses elements of LHCb’s software framework as well as its own, and both of these are available on CVMFS:

The availability of CVMFS on GridPP resources, as well as the ease with which software can be deployed, managed, and accessed, has greatly helped with MoEDAL’s move to grid running and serves as a useful example for other new user communities. To find out more about how CVMFS can help with your distributed computing needs, see their website here.