The plans for GridPP were drawn up at a meeting at the Rutherford Appleton Laboratory in December 2000. Originally, funding was to be used to support the UK arm of the LHC Computing Grid (LCG). It was eventually decided that a stand-alone organisation would created because LHC Computing was not being sufficiently funded at CERN; furthermore, a dedicated UK effort would promote UK visibility, give the UK a much closer relationship with CERN IT, and provide a large number of well-trained people. The first proposal – a one hundred page document requesting £25.9M over three years – was submitted in April 2001 and approved a month later. The first GridPP Collaboration meeting was held in May 2001 at Cosener’s House, Oxfordshire, and GridPP officially started running in September 2001. 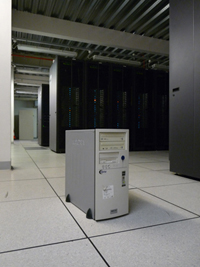 Since then, grid infrastructure used to power LHC computing has been developed by the GridPP community. Manchester and RAL joined CERN and CNAF Bologna in the first working HEP grid in 2001 which evolved into today’s WLCG. The UK’s contribution to WLCG includes the UK Tier 1 Centre at RAL and the four regional UK Tier 2 sites known as LondonGrid, NorthGrid, ScotGrid and SouthGrid. GridPP has successfully supported computing for the LHC and beyond all the way from the first Monte Carlo collision simulations, to the LHC switch on in 2008, first beams in 2009 and the discovery of the Higgs boson in July 2012. Funding has been renewed roughly every three years; the current round is known as GridPP4+.

Throughout its history, GridPP has consistently delivered world-class computing in support of the LHC experiments and many more user communities in a wide variety of fields. As the LHC’s Run 2 continues, who knows what the future – and the data it brings us – will hold?